Amsterdam is brimming with culture and entertainment possibilities. It offers world class nightlife, however if you aren’t in the city to participate to the Club and Coffeeshop scene, there are plenty of more refined ways to be entertained. Here is out list of the best in Amsterdam entertainment:

Amsterdam is a very artistic city, from the architecture to the street art, you can hardly throw a stone without hitting a work of art. Graffiti, human statues, priceless paintings, and beautifully landscaped parks and gardens abound in Amsterdam.

While many foreign visitors will have trouble with the Dutch language and the vast majority of the books published in Dutch, there are several English language book stores in Amsterdam, as well as a book market at the end of the Spui Straat, and a second smaller one near Waterlooplein.

Amsterdam has dozens of movie theaters, from big modern California style multiplexes to little art film houses. It is a very popular thing for the Dutch to eat dinner at the theater before the movie, and most movie theaters have a restaurant inside.

As with works of art, there are numerous local musicians and bands in amsterdam, and it has proved an ever popular stop for bigger touring acts. The Amsterdam Uitbureau provides the best information about shows and concerts in Amsterdam, and you can also have a look at Amsterdamtourist.com’s concert and music listings.

The Heineken Music Hall is a huge concert hall located near the Amsterdam Arena.  It serves as a venue for big audiences.  This is where the big shows like Rolling Stones, Fleetwood Mac and the like are usually held.  Two other popular though smaller venues, the Melkweg and Paradiso are found near the Leidseplein. Both host a variety of acts from DJs to Rock and Roll. For jazz, check out the Bimhuis and for rock and live music check out the Waterhole.

Amsterdam is the home of the Royal Concertgebouw Orchestra, a world-class symphony orchestra, that performs regularly in the Concertgebouw concert hall. Located across Van Baerlestraat from the Museumplein, the concert hall is considered to have some of the best acoustics in the world, contains three performance halls, and hosts eight hundred concerts per year.

Amsterdam’s opera house, the Stopera, is in the same building as city hall on Waterlooplein.  This modern venue opened in 1986 and is built atop the former Jewish neighborhood wich was torn down after world war two.  The Stopera hosts De Nederlandse Opera (National Opera), Het Nationale Ballet (National Ballet) and the Holland Symfonia (National Symphony).

Muziekgebouw aan ‘t IJ is another large concert hall near central station presenting mostly modern classical concerts. Located next to it is the Bimhuis, a venue focused on improvised Jazz.

There are dozens of sports teams in Amsterdam, as well as many opportunities for individual participation in activities as diverse as sailing, bicycling, inline skating and rock climbing. there are many sport and fitness clubs around the city providing exercise facilities for travelers.

Amsterdam is home of the football club Ajax Amsterdam, who play at Ajax Arena. It is located in the southeast of the city next to the new Amsterdam Bijlmer Arena railway station.

The ice hockey team Amstel Tijgers play in the Jaap Eden ice rink. The team competes in the Dutch ice hockey premier league. Speed skating championships have been held on the 400-metre (1,310 ft) lane of this ice rink.

There are three field hockey teams, Amsterdam, Pinoké and Hurley, who play their matches around the Wagener Stadium in the nearby city of Amstelveen. The basketball team MyGuide Amsterdam competes in the Dutch premier division and play their games in the Sporthallen Zuid, near the Olympic Stadium.

Since 1999 the city of Amsterdam honours the best sportsmen and women at the Amsterdam Sports Awards. Boxer Raymond Joval and field hockey midfielder Carole Thate were the first to receive the awards in 1999.

In 1928, Amsterdam hosted the 1928 Summer Olympics. The Olympic Stadium built for the occasion has been completely restored and is now used for cultural and sporting events, such as the Amsterdam Marathon.

Amsterdam has many theaters holding performances of world class productions almost every night. Most of the bigger shows are held at the Sopera near Waterlooplein.  Another large theater in Amsterdam is the Stadsschouwburg at the Leidseplein. Home of the Toneelgroep Amsterdam. The current building dates from 1894. Most plays are performed in the Grote Zaal (Great Hall). The normal program of events encompasses all sorts of theatrical forms. The Stadsschouwburg is currently being renovated and expanded. The third theater space, to be operated jointly with next door Melkweg, will open in late 2009 or early 2010.

Other theaters are: The Bellevue Theater, de Kleine Comedie, The Royal Theatre Carré, and the Stopera.

The English spoken comedy scene was established with the founding of Boom Chicago in 1993. They have an own theater at Leidseplein.  The Netherlands has a traditional cabaret called kleinkunst dating back to the 1930s, which combines music, storytelling, commentary, theater and comedy.  Visitors can find regular kleinkunst performances in Dutch. 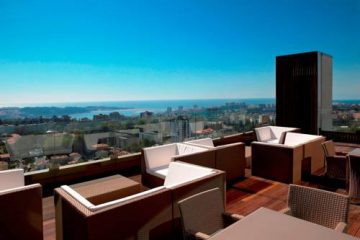