While the Dutch are not internationally known for their cuisine, there are many Dutch dishes that you simply must try on your visit to Amsterdam. Here are some things that are distinctly Dutch that you’ll want to sink your teeth into. 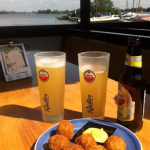 allen – These little snacks can be found at almost any bar with a snack menu. Filled with mystery meat and filling, these deep fried nuggets have been likened to “Thanksgiving in a Ball” and “A Deep-fried Pot Pie Nugget.” They’re served with mustard for dipping, but be careful – the filling is HOT!

Cheese – With its green countryside filled with grazing cows, it’s no surprise that Holland is well known for its cheese. In fact, Holland is the largest cheese exporter in the world. Be sure to get 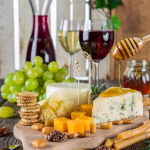 your hands on some Dutch cheese here, with a wide range of varieties including Gouda, Edam and Maasdammer that are well known worldwide, as well as more local varietals, like Boerenkaas (farmer’s cheese), which is made with raw, unpasteurized milk. Many pubs offer a cheese plate, or stop by a cheese shop or one of the stands at Albert Cuypmarket to grab a piece for a picnic.

FEBO – FEBO isn’t a dish, it’s a dining experience. A chain of automatiek Dutch fast food restaurants, FEBO features a wall of vending machines where, for a few coins, you can buy a burger, kroket or frikandel with no human interaction whatsoever. It’s an interesting experience to say the least.

Frikandel – Another typical Dutch snack is the frikandel, which looks like a sausage, but is actually made up of deep-fried minced meat, and served with a bun or a mixture of sauces. Frikandel are available throughout the city at many snack bars, pubs and of course the local FEBO. 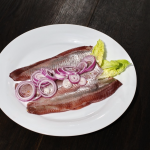 – A popular Dutch food that’s often off-putting to foreigners is haring (herring). Typically sold at street side stands, the herring is served up raw, covered in onions and pickles, and quickly devoured. It’s a soft, salty fishy and, to be honest, intimidating experience (it’s even said that the slimier the herring, the fresher and better it is). Adventurous tourists can find haring stands throughout the city, and trying one will create a great story for the folks back home.

Ice Cream – Dutch ice cream is taste experience like no other. Made with slagroom (full-fat cream), it’s richer, creamier and softer than any you’ve ever tried. The best Dutch ice cream can be found at Ijscuypje, which has several locations throughout the city.

Joppiesaus – A sauce invented in a Dutch cafeteria by its owner )who was named Joppie), Joppiesaus is a cold yellow dipping sauce made with onion and curry. It goes well on fried, burgers or with bitterballen. The official recipe is a secret, but many places serve a sauce very similar. 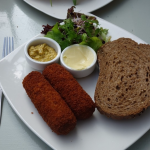 Kroket – The Dutch love their deep-fried snacks! Similar to bitterballen – krokets are a sausage-shaped bit of deep-
fried meat filling. Many variations exist on krokets, including krokets with chicken or seafood filling. They’re available on many bar menus, as well as served piping hot from the machine at the local FEBO.

Pannekoeken – Similar to pancakes in the states, the Dutch version is different in that it’s thinner, larger and often served with toppings – either savory or sweet. At any of the Dutch pancake houses throughout the city you can order a pannekoek with meat and/or cheese as a main dish, followed by another with fruit, powdered sugar or a variety of sweet items for desert. 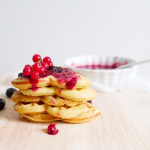 ertjes – A traditional treat is the pofertjes, like miniature pancakes but much fluffier. They are available throughout the city streets, and are typically served with butter and powdered sugar.

Rookworst – A typical Dutch sausage, the Rookworst is similar to smoked sausage or kielbasa. It’s often a main ingredient in stamppot, and perhaps the best place to pick up one of these is the local HEMA.

Salmiak – This is perhaps one of the most foreign food experiences in the Netherlands (with the possible exception of haring), partly because it looks so similar to licorice, but is quite different.  With a flavor similar to licorice, salmiak is veeeery salty, from the addition of ammonium chloride (ammonia salt). Another variation, zoute drop (salted licorice) contains regular salt with a similar taste. 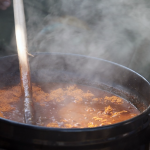 Stamppot – Stamppot is a Dutch tradition for the cooler months of the year. A mixture of boiled potatoes and vegetables typically topped with a rookworst and gravy, this is Dutch comfort food at its finest. It’s warm and chases away the chill, and countless variations have been developed on the traditional recipe. Many Dutch restaurants carry a version on their menu, and many grocery stores also sell a premade stamppot. 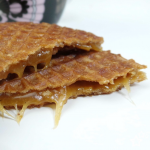 fel – A wonderful sweet for breakfast, desert or a snack, the stroopwafel consists of a caramel filling, sandwiched between a pair of waffle wafers. They can be purchased fresh from street vendors and packaged at the grocery store. Try them once and you’ll be taking several packages home with you.

Surinamese Cuisine – While not Dutch, the prolific number of Surinamese restaurants in Amsterdam makes it a unique experience, with perhaps more Surinamese food than anywhere else in the world (with the obvious exception of Suriname). The smallest country in South America, Suriname is a former Dutch colony, which has lead to a large number of immigrants to the Netherlands.
Suriname itself is a melting pot of Indians, Creoles, Indonesians, Chinese and Dutch, and the food reflects this, with an additional Caribbean flair.

Vlaamse Frites – Although it’s a Belgian dish, you need to stop by one of the many fry stands while you’re in Amsterdam. Frites are typically served in a paper cone or box with a large glop of mayonnaise, fritesaus or Joppiesaus for dipping. 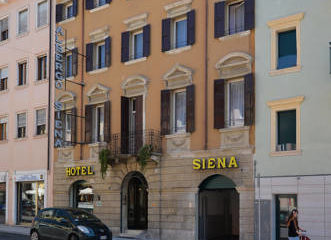